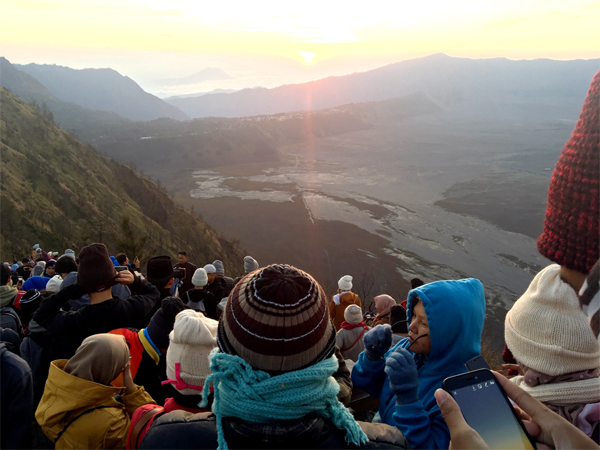 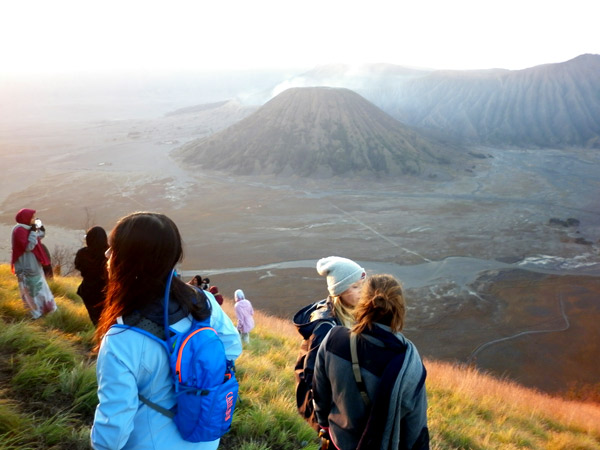 The sunrise had been spectacular and Nick had some great photographs and after taking the last shots was about to make the easy descent in broad daylight to the 4WD Toyota’s that had brought him here, when he sensed a presence of someone beside him. Turning, he drew a quick gasp. It was her…

Travelling from Denpasar to Mt Bromo

My journey began in the narrow street outside the hotel that exhibited the almost innocuous replica of a Hindu stone gate that the daunting full size one at Mt Bromo would later in grand style open to me the forbidding but necessary initiation to the strange world I had searched for throughout Asia.

Ascent to the viewing area.

Less than 24 hours later I was climbing the tussocky slope to the viewing area where I would see my quarry– Mt Bromo. The analogy of the word quarry was certainly ominous. I took another break. It was very dark at 4am. I marveled at the possibility that this volcano effectively did its own excavations– an impossible task for mortals. Any attempt to enter the great depths and mine the surreal hole would culminate with either agonising asphyxiation or an abrasive fall to certain death. I put these thoughts aside for the moment, as struggling through the long grass without a light was taxing. It was difficult to see the path – if there was one up ahead.

This was certainly going to be a chapter in my novel, and as the morning continued the events and experience of visiting Mt Bromo Caldera would be an excellent location for the protagonist to advance in his journey.

For Nick this was not a digitally formed mountain but steps molded precisely with shape and levels for logical progression, suggested that assumption. The staircase precise with mathematically formed stages. He was not to know but for him that format would come later.

He’d left the Toyota four wheel drive at the road where the driver had pulled to the verge along with a hundred similar vehicles [FJ40 models] He noted its green duco and took a phone snapshot of the registration plate. Hopefully on return he would be able to identify it again from the assembly of immaculately restored nineteen-eighties four wheel drives.

He dodged around the motorcyclists, some with engines stalled, others revving hard in low gears belching clouds of smoke as dismounted pillion riders resorted to pushing the bikes up the final rise. In the lights of the 4WD’s lurching past, he saw a path through a cutting diverting away from the road. He entered through the narrow access and immediately the sandy track steepened. His eyes struggled to adjust to the pitch blackness after the lights of the busy road and he swept his hand out to feel for the edge as he began his ascent. He remembered the torch in his luggage back at the hotel.

He was entering another world.

A world of ascent through a banal analog natural blending of levels and hazy stages that at times would fragment and offer no support to his footing until he discovered a surer way of climbing by grasping the grasses and tussocks, barring at one moment, next, yielding to his advance.

The reoccurring side-effects of the drug were slowing him.

He took a deep breath. His heart rate eased and the nausea passed.

Forced to his knees by the incline, he made the final part of the climb by pulling himself forward using the grasses. Eventually he emerged from the shadows.  He paused for breath his heartbeat fast and heavy in his chest. Ahead he could see the silhouette of twisted and deformed trees against the pale sky. He would pass between them and use his grip on the rough bark to help him with his advance.

Finally he was just below the fenced area where the crowds had assembled, he chose a vantage point where it appeared to offer more space flat enough to stand comfortably while waiting to photograph Mt Bromo in the light of rising sun. 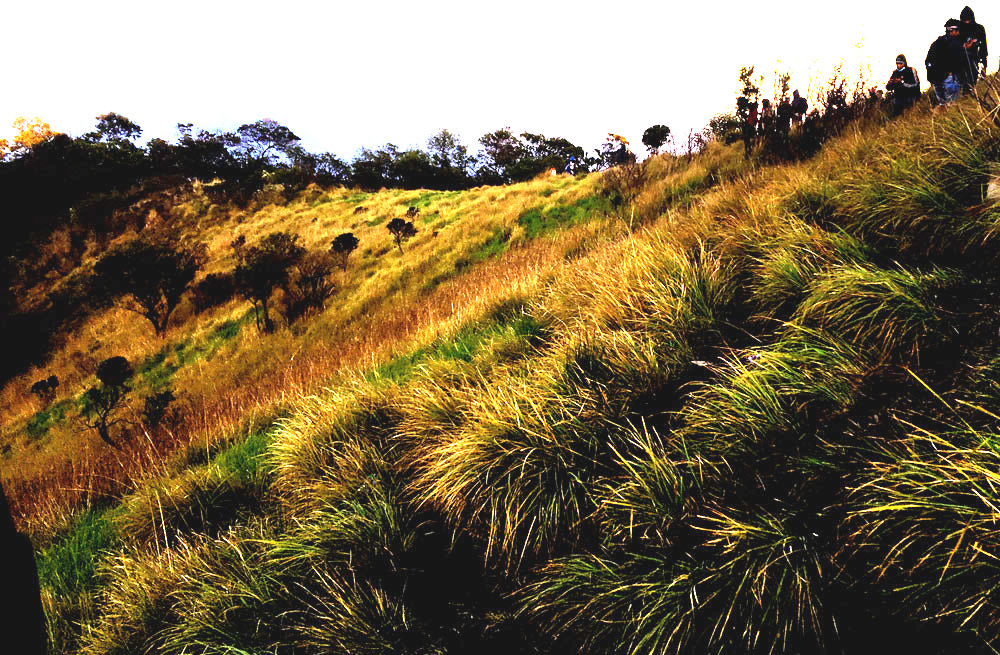 He recalled the wait for his transport at the village resort. He remembered waiting for over half an hour, and even when the Toyotas had arrived, being directed to a second one parked up a steep incline away from his room. Why was that? And why was the barrier he’d ducked under closed across the steep road? Where had Megan gone? Were they deliberately split up in a tactical  plan to reduce their power?

Choosing the only available reasonably level space he stood, taking in the dark shapes of the jagged skyline.

He watched the sunrise.

The slow processing of a new day with the assembling of colour and form from a vague and uncertain darkness.  Shapes in the topography that weren’t there moments before, appearing with indisputable substance, claiming place in the world.

Moments later all the lights flashed back on more vibrant than before.

A young woman with an aura of magnificence and wearing unusual clothing descended through the crowd. Was this some ritual he had not heard about? 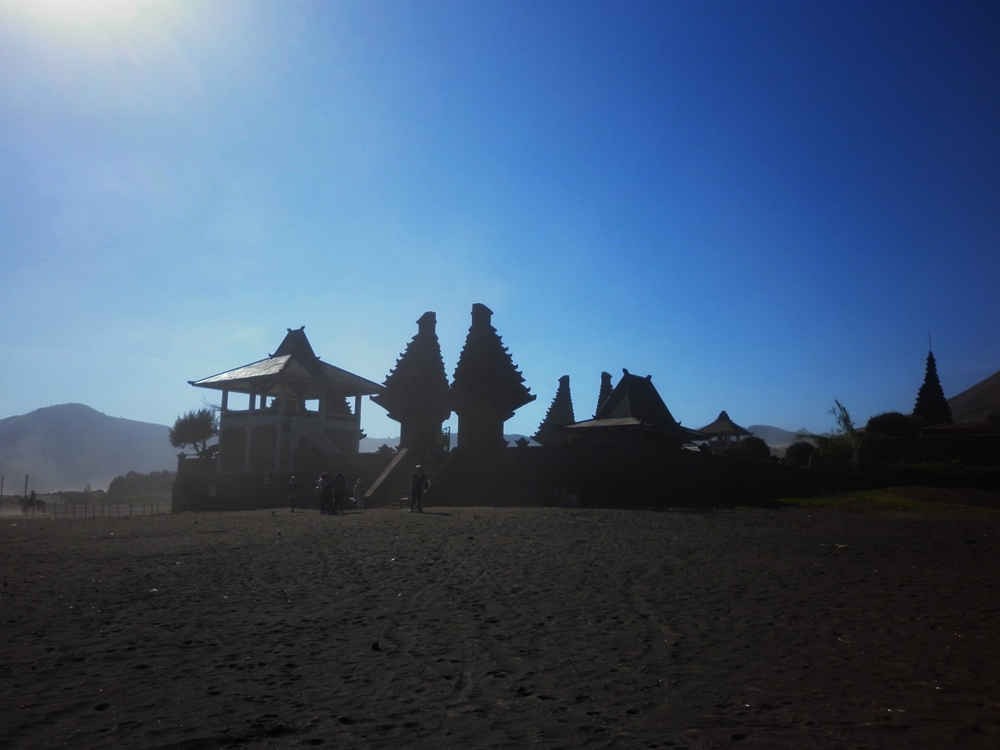 Last Glimpse at The Hindu Shrine

Following his descent from the crater Nick passed the Hindu shrine with its huge blocks of black stone. Turning, he walked towards it through the shimmering grey sand and ash until he was close to the entrance pillars. Unlike the red brick tower entrances of Trowulan further to the north, or the photographs he’d seen, these ones were strikingly black and the opposing faces smooth as if they had been built as one tower, then sliced vertically, before being moved apart to form a precise entrance that could at any moment be tightly and imperviously closed.

Directly between the tall dark pillars stood the girl. He started towards her. As he did a pony led by a Tenggeran native crossed his vision. At the same moment a waft of sulphur fumes drifted over him and he covered his face. After a moment the air cleared and he raised his head. The native of the community with his pony had passed, but she was gone.